Securing your server
Convert your Linux server to a fort

In this post I will show you a few ways to secure your Debian (or Ubuntu) based server. This contains to secure your SSH connection, protecting against brute force and protecting against port scans. Also I will show you how to easily use iptables via an additional package. This is not the holy grail of security, there are really more things you might do. Like using chroot and other solutions to make your system secure. This article just shows you how to secure your SSH login and how to avoid brute forcing and a few port scans.

You are an admin, you have to look into server security, don’t be lazy and read some articles and manuals. There are more than enough in the WWW, just waiting for you

Debian has not the package sudo installed per default. sudo enables running commands as superuser. To grant this privilege to a user you might add him in the file /etc/sudoers or add him to the group sudo. Lets start:

If you want to add a user to the sudo group, do that:

For some security reasons, like forbidding non sudoers hopping to another account, I am removing execute privileges to the command su:

This will only allow the user root or via sudo to execute it.

This is the most important part, to secure your SSH Server. I assume you know what SSH, ports and Well known ports are. At first, do not run your SSH instance on port :22 (otherwise you have really good reasons for that). Mostly bots are trying :22 for brute forcing. Also, never permit root login, the user root always exists, so it will be the best try to brute force against that username. Let’s start and create a new user:

Okay, we have a new user now. Let’s do the important part to your sshd, open /etc/ssh/sshd_config with your favorite text editor (with sudo or as root). There you will have to change a few lines:

It should not echo anything, so nothing is running on that port. If something listens on that port, change it. The settings will disable that the user root is able to login and only key authentication can be used. As the user you just created (wirehack7 in my example) you need to generate a key pair, the public one will be on the machine we are configuring just now, and the private one will be on our home machine (or from whatever you want to login). If you are using a Linux based machine, do that:

I highly recommend that you also that a pass-phrase on your key, if it gets leaked the attacker must have also the pass-phrase to use it. Two files are created, id_dsa and id_dsa.pub. Copy the contents of your id_dsa.pub file and switch to your remote connection. For Windows get puttygen.exe and generate your key pair: 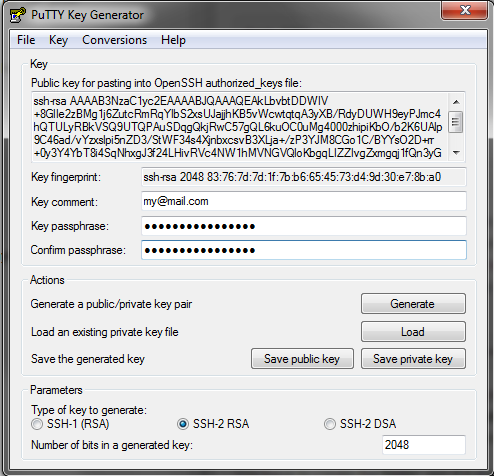 Make sure that you chose SSH-2 RSA. You might also change the bits which are choose to 4096, but 2048 is okay so far (maybe not for NSA). Copy the content of the box at the top (“Key”). Save your private key to a safe place.

You have to create the folder .ssh if it does not exist. Also SSH needs a file to read the public key.

Make sure that the copied line is ONE line and contains no line breaks Now, restart your SSH daemon:

Do not close your existing remote connection, otherwise you won’t be able to connect if anything fails now! Open a new connection and use your private key. In Linux do that:

In Windows open putty.exe and edit that part: 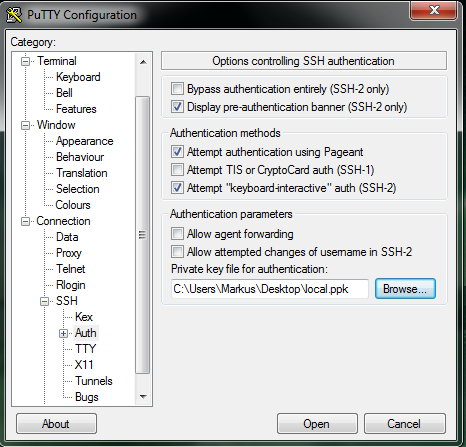 If this works you are done with the SSH part, if not, read the text above again and make sure you have done everything right.

Now we get to the protection against brute forcing. Fail2Ban listens on some ports for login attempts (and more). After n tries it will ban the IP. Install fail2ban:

In /etc/fail2ban/jail.conf is your configuration for whitelists, number of tries, action to ban and the listened ports/services itself. Change these:

This will listen on our desired SSH port for login tries, after 3 false tries it will ban the IP. ssh-ddos will protect your SSH port from simple DDOS attacks, i.e. sending TCP packets to your port. I recommend you to read some manuals about fail2ban, it is a really powerful tool and can be misconfigured easily.

Many will recommend you to use iptables by hand, I do so, too. In that way you will understand how a rule works and how the traffic will be processed. For a simple port configuration you might also use ufw. This is just a “helping tool”, which means it is kind of a mask for iptables. You install it easily with that:

After installing you have to allow connections to your port:

IPv4 and v6 rules will be added. To enable it simple drop that line:

You will be prompted if you are sure about this. This is not for fun there! If you entered the wrong port and enable it, it will simply drop your connection. Even a restart won’t help anymore, you have to get into a rescue mode and disable ufw manual. ufw is simply using whitelisting, all ports which are not allowed are closed. It is even able to do more, just read some manuals about it.

The counter part of portscanning attacks comes here: portsentry. This tool listens on ports and analyses for port scanning attempts, like from nmap. This is not the glory grail, this is just a chance to counter some scans. To install do that:

Portsentry will block nothing now. We have to set a few settings (wouldn’t have guessed eh? ;) ) Let’s open /etc/portsentry/portsentry.conf and edit a few lines:

This will drop port scan attempts for TCP and UDP. I like it that IP’s are resolved to names, so you can change that line:

Hooray, we have a counter to port scans.

As mentioned in the entry, this is not the holy grail, this is just one of thousands methods to secure a server and gives you a quick overview to the aspects on securing. With more services, more security must be implented, like for MySQL, Apache2 etc. Don’t close your eyes, read about security. You are admin, the users trust you.